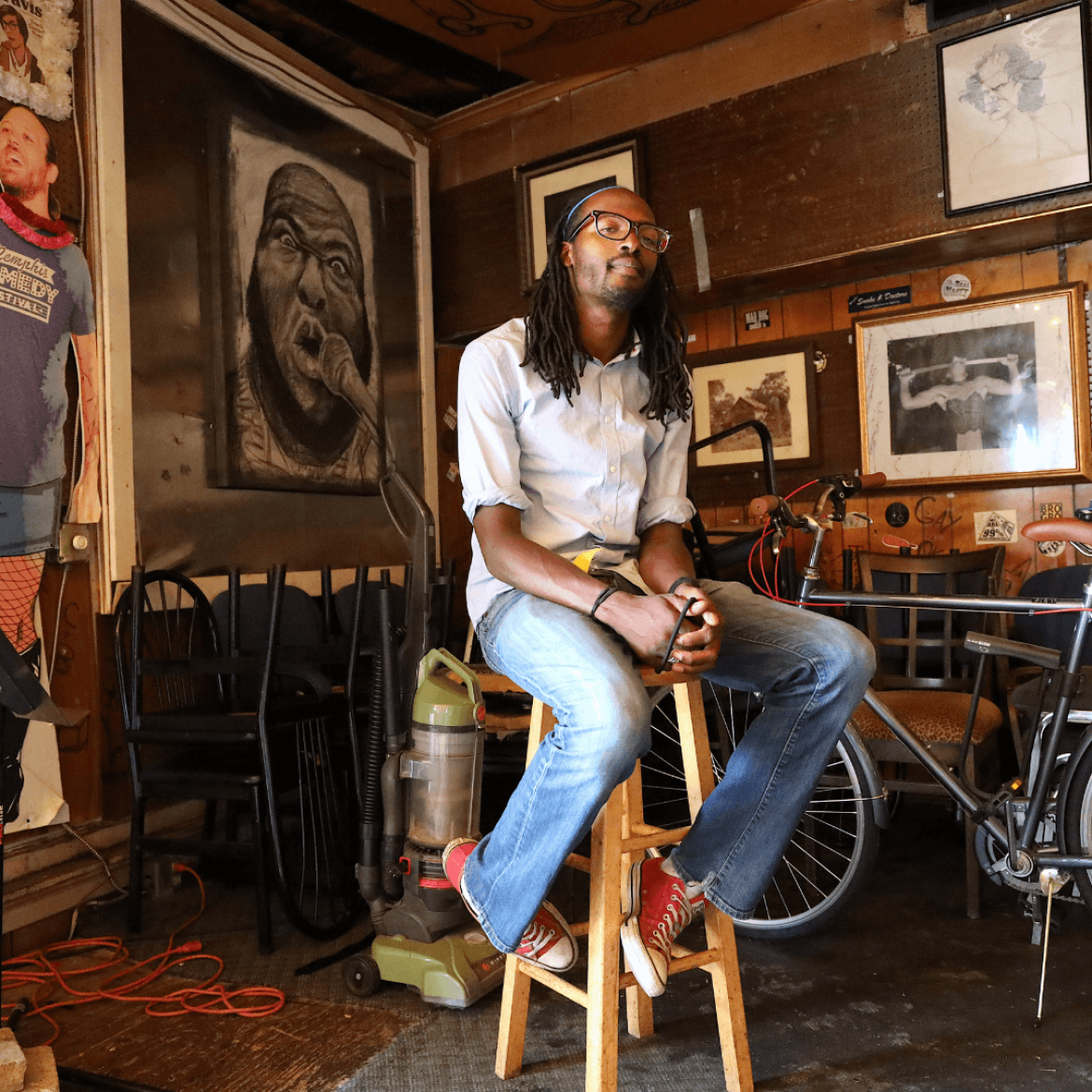 His journey starts with him growing up in Arkansas with his mom and his brother. They didn’t grow up with the ideal life. Mahan  mentions that there were times when he and his family were homeless or in survival mode either due to the crushing powers of capitalism or the police system. He reflects on a time when his mom was arrested and taken away from he and his brother for a year ‘over a misunderstanding.’ Quietly, Cornell Mahan found ways to pay the rent in order to keep a roof over he and his sibling’s head while the situation got handled. Thus, growing up, Mahan was viewed by others a fairly pessimistic, but him, it was his reality and his reality was pretty messed up. [/vc_column_text][vc_column_text]

“I’ve always been told especially by my 11th grade teacher that there was some angry spirit in me somewhere, and I needed to figure out exactly what that was,” said Mahan. ‘I knew exactly where it came from, but explaining it to her would be a waist of time.’

[/vc_column_text][/vc_column][/vc_row][vc_row css=”.vc_custom_1459428507763{padding-top: 24px !important;padding-bottom: 45px !important;padding-left: 10% !important;}”][vc_column][vc_column_text]Years later, Mahan decided to travel to Memphis to pursue art, an outlet that he routinely used to express his view of the world and as an escape from the chaotic wonder of the world. Originally, Mahan had his mindset on not attending college, but his English teacher was determined to break through to him the importance of going to school. Mahan was told he had to go to college so he should pick one. So, he settled on Art school in Memphis. He eventually learned to love the environment and flourished as an artist there. He even found himself developing genuine and lasting friendships there. And the big ideas began to flow. Mahan explored digital art and birthed the idea of starting his own production company entitled “Modern Chemistry 101.” Thanks to the support of Mahan’s high school English teacher, Mahan not only survived Art school, but he also has gained significant notoriety through his contributions to the Memphis arts scene.

When Mahan was asked how he would describe the world artistically, he said he’d choose the color red, the color of chaos. He then delved into the injustices in the world and how it is being played out in the media and in real life. Police brutality and racial profiling were at the top of mind. Cornell’s mentions that his brother Michael who had several encounters with the police for various reasons and because of that they seem to keep him on their radar for any problem suspected or otherwise. They just assume he did it or has something to do with it, Cornell expressed. And on several instances, Cornell recalls being profiled or mistaken as his brother without even checking his ID first. Although siblings tend to look alike, profiling is something that is done to Black people regardless of whether they actually fit the description or not. Injustices like these are what drives Mahan’s pessimistic realism. And he is very doubtful as to whether the world can actually ever change this approach or not.[/vc_column_text][/vc_column][/vc_row]